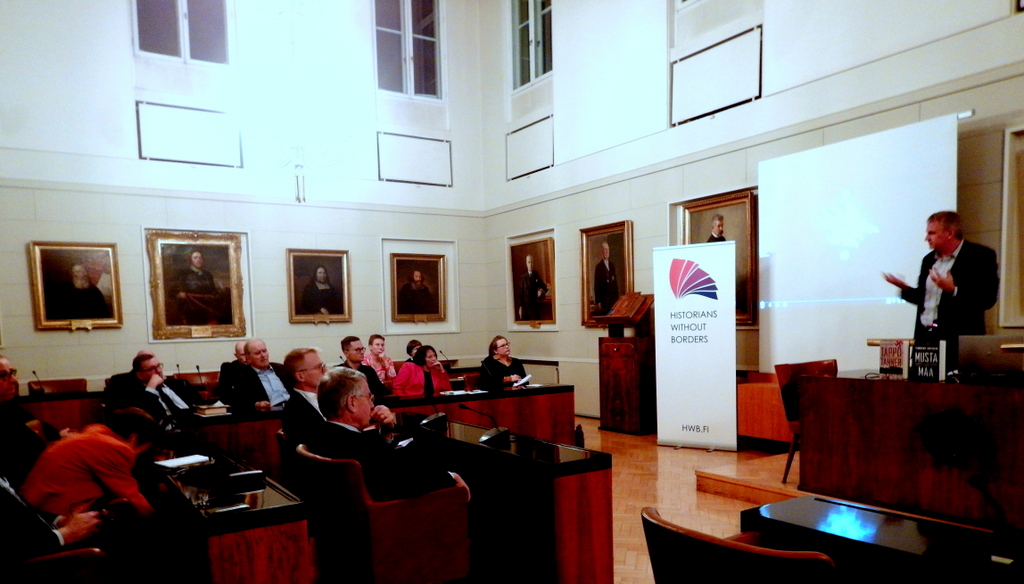 In the evening of 9 November, Historians without Borders in Finland (HWB) had the pleasure of hosting a discussion with Professor Timothy Snyder from the University of Yale. Professor Snyder is known as the leading historian of the Holocaust, and has published widely on Central and Eastern European history. He was joined in the discussion by Dr. Katalin Miklossy, who specialises in the history of the Visegrad countries, and Dr. Suvi Kansikas, an expert of the history of EU-Russia relations. The panel was chaired by Professor Kimmo Rentola from the University of Helsinki.

The discussion was based around the theme of use and abuse of history, thus continuing with the topic of the conference organised by HWB in May 2016. Professor Snyder used the opportunity to make very interesting remarks about some perhaps less recognised myths prevalent in European history. According to him, the idea of learning from history has been a crucial element in the history of the European Union, in the sense that it is strongly presupposed that Europe learned from World War II that ‘war is bad’ and therefore took up the project of European integration. This, however, is based on a myth. Instead, it was far more the imperial history of the founding countries of the EU, and the post-imperial situation in which they had ended up after World War II, that gave rise to the EU.

What this also means is that the entities that went on to form the EU were not nation-states, as is commonly claimed, but rather parts of failed empires. In Professor Snyder’s view, therefore, the countries cannot simply exit the EU and assume their ‘old’ role as nation-states, because this is not a role they have ever had before. The puzzle pieces that form the European Union today are essentially not the same as the ones that went into it in the past.

Yet the myth of nation-states remains prevalent and is generally not seen as an example of abuse of history. This is because it fits so comfortably into a specific political situation and complements the interpretation that we are used to hearing about history. In fact, as Dr. Miklossy pointed out in her commentary, such myths can in some contexts be beneficial with regard to shaping the future. For example, Eastern European countries like Poland or Hungary have always been stranded between Russia and Europe, in effect forced to ally themselves with either one. For them, the European myth of nation-states has been useful, as it has allowed an integration within the EU without risking the idea of national independence.

Professor Snyder agreed that historical myths, and indeed uses of history, can be benevolent and even advantageous. Historians, however, need to not only be aware of them but also be able to analyse their consequences and implications. The myth about nation-states, for instance, should not be neglected, as now has largely been done, when trying to understand the so-called Brexit question in Great Britain.

The pertinence of this interpretation of European history may also obscure the fact that the current path of the EU is not the only one that could have occurred. As Dr. Kansikas remarked in her intervention, before it was established as the EU, the European Economic Community was only one among many actors that could have taken on a leading role in European integration and possibly navigated it through a very different route. Indeed, as Professor Snyder later commented to a question from the audience, such contrafactual history can be a fruitful thought exercise even if it does not necessarily amount to sound and secure analysis on its own.

The discussion continued with questions from the audience, which included a number of prominent Finnish historians. The topics ranged from Russia’s relationship with democracy to Finnish history and the US election results from the night before. Almost all of these also had some linkage to the use of history, as if to underline its importance and relevance in current public discussion.

Emma Hakala
Ph.D. Candidate, University of Helsinki
Secretary of the Board, Historians without Borders in Finland